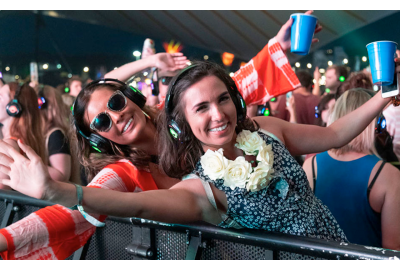 The scorching sun set and the night came alive when the Silent Disco Team provided the entertainment for 5 nights in 2 venues. One, a huge tent, the other a post apocalyptic cinema.

Glastonbury officially kicked off on Wednesday with the World Premiere of Ibiza: The Silent Movie, named the loudest silent film in history. Festival organiser and legend, Michael Eavis was in attendance having arrived in an open top Cadillac.

Cineramageddon is a 'drive-in' cinema area of the site where cars are a work of art, modified, buried in the ground, disguised as Lear jets; and after the movie Fatboy Slim took the decks to provide an hour long Silent Disco for the excited viewers, all powered by our wireless solutions.

The area glowed red from our headphones as the legend took the massive crowd through a mix of Ibiza classics.

Check Out the Pics from Wednesday at Cineramageddon

During the rest of the weekend, 12 films were shown overnight to an entranced audience sat in their vehicles using our speakers and Ned receivers, or wearing Harry headphones around the field.

Over in Silver Hayes, we provided the headphones for 4 massive Silent Discos. Each night thousands joined us in the Sonic Stage to dance, sing and celebrate with DJs including the team from Propaganda, who smashed proceedings on Thursday. For just a £20 deposit for the headphones, you could party for as long as you wanted.

Billy, The Stage Manager, who slipped the Eastenders theme into his set and it killed!

Birthday girl Abi, who celebrated by DJing at Glastonbury.

The Monday morning 6am crew who were still dancing, whilst people were heading for the car parks in the background. That's dedication.

We were even mentioned in The Daily Telegraph's Best Saturday Moments:

Check out the pics of the Silent Discos