10 Tips for DJ's playing at a Silent Disco 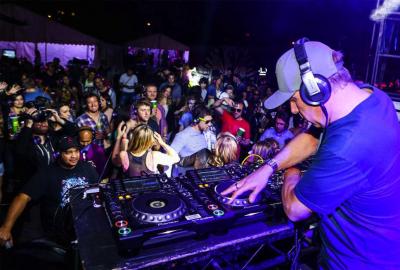 We've been lucky enough to see and host loads of silent discos in all kind of scenarios around the world. Even though every event, customer, DJ and music style is different there's a few things in common that can help all DJs.

1) Understand the dynamics of a Silent Disco

Whilst the DJing skills and ingredients are the same at a Silent Disco to any other party, the dynamics are different. In a traditional Silent Disco set up (which this post is about), there are at least 2 DJ's playing at the same time, and you are in competition with each other.

If you normally play at parties where you're the only source of entertainment, you've been used to a captive audience. That means sometimes people may have been dancing even when they didn't really like a song, they just couldn't be bothered to leave the dance floor or venue.

Consider this "captive audience" gone. For this event you are living or dying by your wits, and you'll need to have your wits about you every second. Think of it like a sports game - you wouldn't win any trophies if you stood there watching the ball roll around wondering what to do next, you'd win by getting control of the ball and taking it where you want it to go.

2) Prepare before the event.

You're likely to need more songs and options than any other night of DJing so it helps to have everything organised in advance. For every "banger" you'd normally have, get 5 ready so you can cut them sooner or drop them if your DJ rival gets there first and drops them before you. Equally think of a few things you can say on the microphone before the night. Nothing's worse than getting stage fright and going silent in front of 5000 people. No one's going to know if you keep a few notes in your phone to remind you of ideas.

This is about winning. No one's going to think you're a great DJ if you've stuck to your specialist sub genre of musical expertise but have no listeners. They'll think the other DJ, who has everyone locked is amazing and you're a loser. So get a bunch of songs that you'd never normally play ready, and be prepared to shake up your style - be ready to use the mic, forget mixing, dance, dress up and have fun.

People switch channels at least every 30 seconds, so you need to keep them interested. Specifically don't play songs the whole way through, especially extended club mixes. It's probably not the place to 2 or 3 minute long mixed transitions between songs either. Sometimes just cutting the next song in before they switch is the best way.

On normal club nights, you might plan to slowly and gently build your night up to a peak. If you do that at a Silent Disco, there's a chance that your rival will totally pull the rug from under you, by having everyone tuned in while you're still chatting to your mate. Surprise everyone one by dropping a couple of massive tunes early, take control and get the night started.

Silent Disco is a much more intimate setting than a traditional speaker system, because people are wearing headphones, it means your voice is literally right next to their ears. So don't be shy, pick up the microphone (even if you don't normally) and talk to them - they'll love you for it.

7) Sort the technology out!

At a Silent Disco you already have something big to contend with - you're playing through headphones. So make sure you've got nothing else to worry about. Know in advance what mixer and set up you'll be using, double check you have every cable and adapter needed, and arrive early so you can get everything set up comfortably.

Statistically, at any given Silent Disco, the majority of people are experiencing it for the first time. Even if they've tried it before, they may be using different headphones or have forgotten, so make sure people understand how to use the headphones - you want them to get the most out of the night. Get on the mic and remind them about switching channels, and if you see people lost or confused, help them!

There's always a chance that you'll lose your Silent Disco headphones - your mate walks off with them, they fall off into the crowd or someone drops a beer. We've seen it all! So make sure you have 2 or 3 backups pairs of headphones ready.

With short attention spans , impact is going to be your best friend. So think about what you can do in advance. Surprise them with songs they'd forgotten about or unexpected mixes and mashups. Cut out the boring parts of the song, and start with the bits they love - the first line of the vocal, or guitar solo. Once interest has waned, maybe just one chorus in, hit them with another banger. What can you say on the mic to get a reaction - make people laugh, sing, shout and jump. It's all about reaction! Don't forget about lights, screens and props. Take inspiration from every live performance you've ever experienced. Better to be brave than forgotten.